There’s a pattern emerging here. Can you see it?

Falling, falling deeply. Falling in and not minding the cold.
Breath it in, and back out. Letting it go.

Falling in with my practice very easily. Then falling right back out. Lacking discipline. Trying to desperately grasp it, like a slippery bar of soap. I can’t force it, won’t force it. It’s as much a part of me as the waxy blackheads on my nose. Accepting it is all part of the journey, as part of the practice.

I’m getting better at recognising this… my lack of urgency. It’s ok not to be OK.

It’s already April, I was going to spout some crap about “New Year, new studio” but it’s a bit late for that. The new space is (if at all possible) smaller than my old studio, but in every other way its sheer luxury. Central heating, natural light, proper doors… I’m laughing to myself as I type this. So what has kept me away? Excuses, laziness and self doubt.

My tardiness has yet again caught up with me and I’m left feeling incompetent, clumsy and awkward with a brush, swearing under my breath as I cock something up because I didn’t clean off the brush properly before delving into a lighter colour and end up with a dirty grey mess on the canvas.

I’ve been making a concerted effort to, if nothing else, draw daily and that is now starting to pay off. I’m still having more failures than successes on the canvases, but I’m determined not to give in and to take my time. I don’t know if the failures are due to my apparent self-doubt and subsequent changes in direction as I try to find my groove again, or something else… honestly, I don’t care, the time for being a self indulgent angsty wanker have gone. 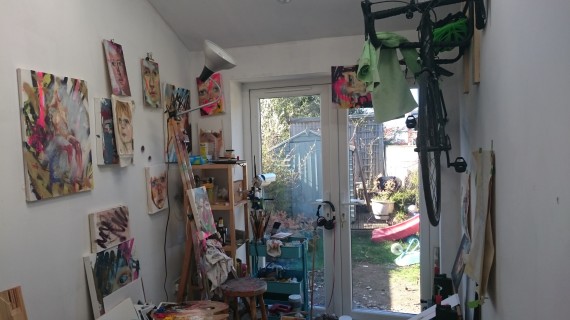 It’s been some time since I even gave drawing any thought. I’ve been in the process of moving studio since the Pretty Portal Show and as such my art has been homeless and fleeting. A firm believer in the old adage “If you don’t use it, you lose it”, if I don’t paint/draw (do art stuff) I start to believe that maybe I’m not really any good at it (this isn’t a cry for help or sympathy), and with anything that you put off, the longer you leave it, the more excuses you can find for not doing said act. I’m full of good excuses, and bad reasons.

The sketchbook sessions are back, this first session is a study of a Kent Williams painting. I make no secret of my love for this man’s work. He has such a stylised way of figurative representation that makes his work very distinctive. 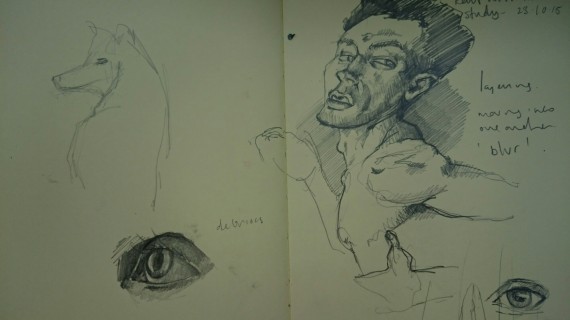 For a while now I’ve been keeping my head down prepping work for a group show in at the Pretty Portal Gallery, Düsseldorf, Germany.  The show is titled “Face Off” and features work from the pretty talented artists, Rowan Newton, Shai Dahan and last but no way least Various & Gould. 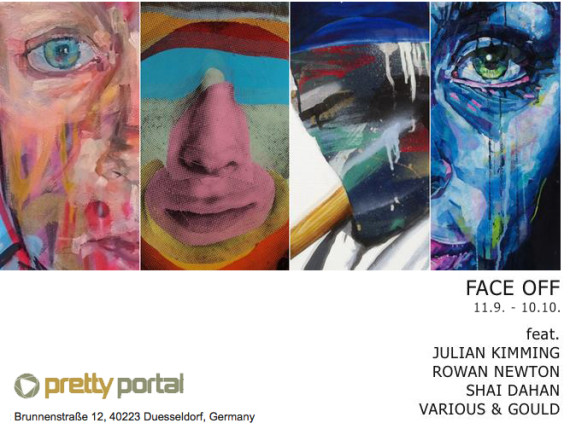 Well, I’m blown away to become a part of the Red Propeller flock. I’m a massive fan of a number of the artists that Red Propeller represents, so to become one of them is wonderful. 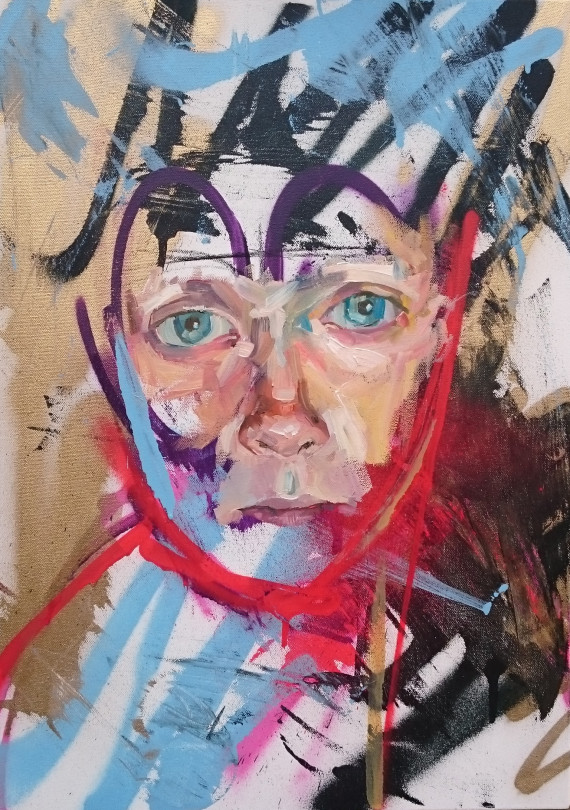 It shouldn’t be surprising that it takes a while to get back in the game after a break from the studio. It’s still disheartening when things don’t go right.
I don’t know if it’s the subject matter, technique or something else that’s eating away at the back of my brain but I just can’t get into the rhythm. Most of the time I just don’t want to paint.
Maybe my mind has gone into hibernation mode due to the cold, maybe I’m just making excuses for being a lazy shit.
I don’t remember the last time I was in the studio to paint for more than a couple of hours, and it’s like that phone call to a friend or relative,  the longer you leave it, the harder it becomes and the more I find excuses not to do it. 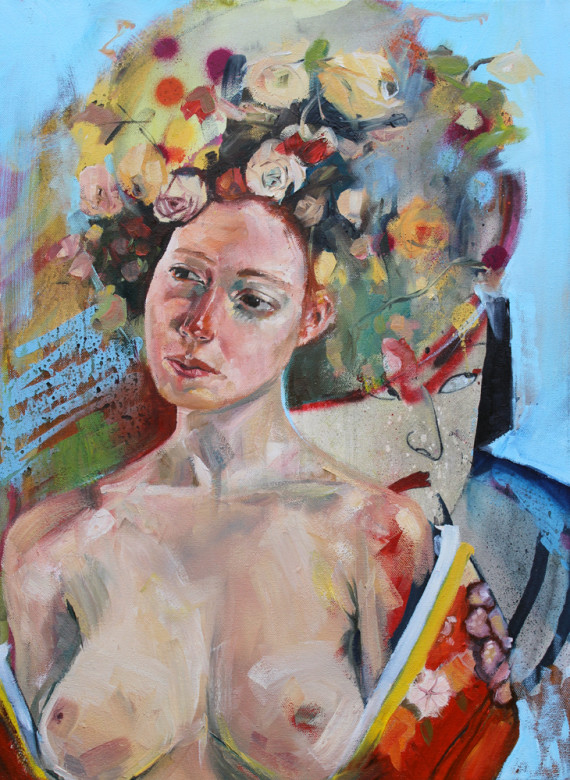 I’m finally happy enough with this now to move onto some more works.

OK – so i’d like to confess something which may offend you… I like other peoples art. I know… it’s shocking, but it’s true.

As an artist, I don’t believe that anyone has ‘rights’ over a style (‘technique’)… I believe that style is something you adapt, if you have the skill to do so, to your own natural requirements, and if not, you end up stranded on your own personal Hell, reproducing art that is not only unsatisfying, but utter shite.

In by-gone days, artists were trained as apprentices. They were encouraged to copy the work of their Masters… to learn from the generation before. It’s only now, in the American generation that people are so concerned with ‘copyright’ and ownership of ’style’. It makes me sick.

Style is not a right, it’s a privilege, something you have learnt from the people that came before you. If you think you’re original… I hate to break it to you, you’re not. Look within yourself… are you influenced by others? Do you like art? Do you like movies? Do you like music? I bet you can’t answer ‘No’ to any of those questions…

If a person paints a copy of a piece of work and passed it off as their own, sure, you have a right to complain. But you don’t have a right to style… If you’re arrogant enough to think that you’re the origin of a ’style’ then you’re nothing more than a delusional prick. Style is something that is developed over decades, is subtle, it’s influence is minimal… it’s use is what’s important. How you interpret that style is what makes your art important, once you realise this, style at this point is immaterial.

Getting ahead of the game 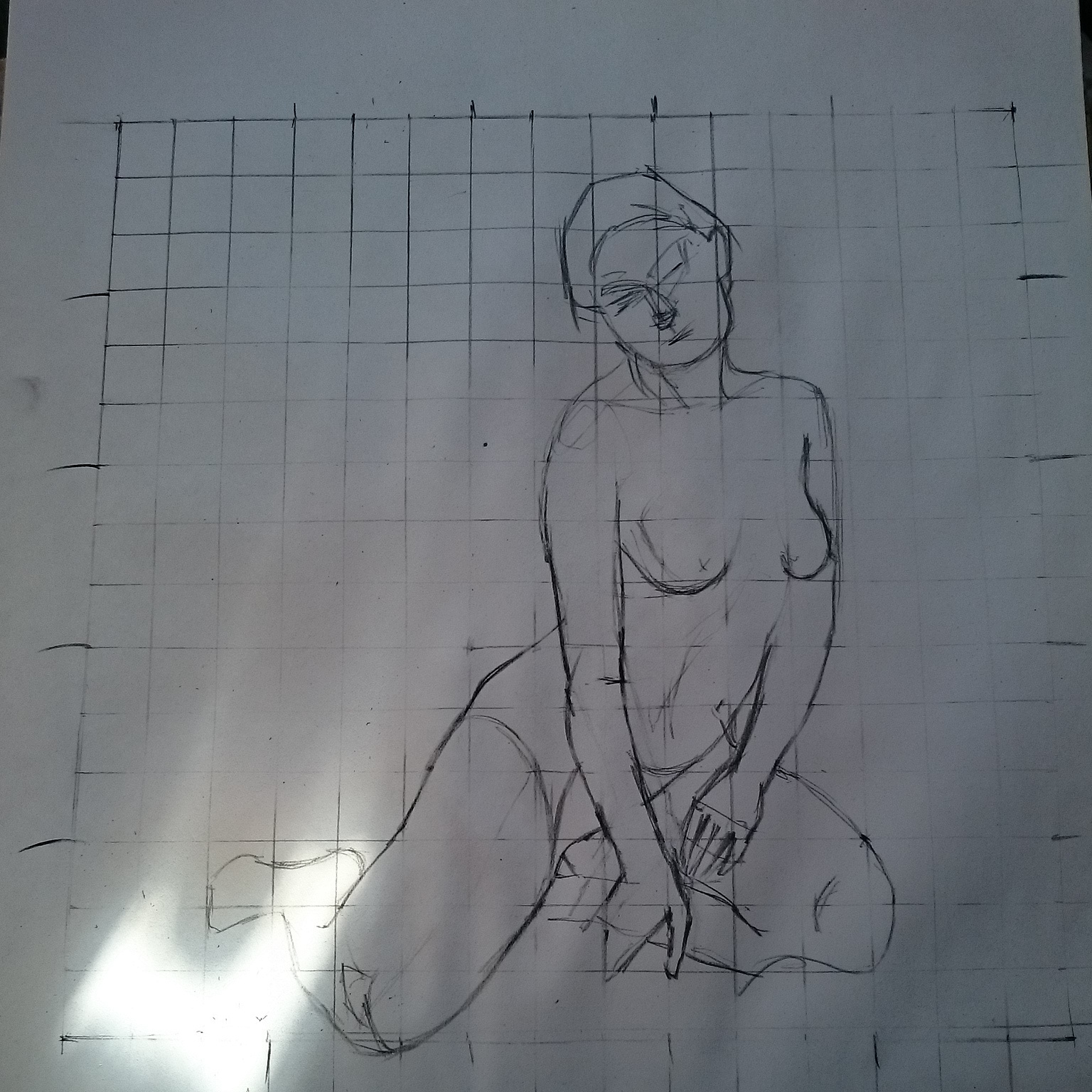 As the cold weather starts

It’s always a slower pace during the winter months. I’d hoped to get the next set of works well under way by now but having a studio clear-out and tidy up slowed the progress right down.
The mental juices are now flowing and I’m starting to get back into my flow. 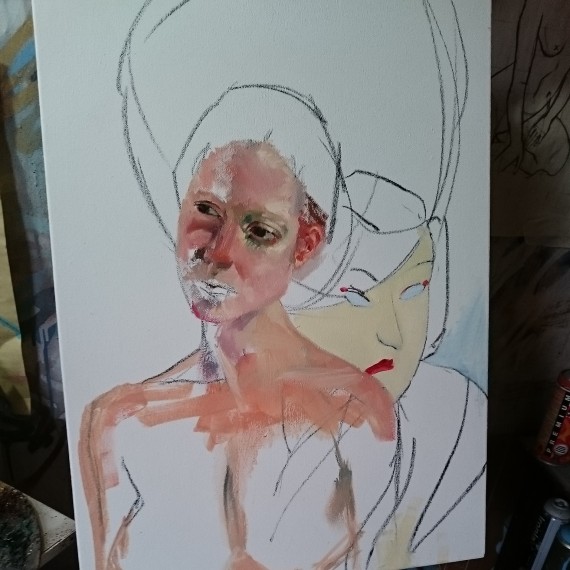